Here has dug out the old my project in garage among any stuff.
Specifically, the idea is organising popular scientific space cruises (tourism) for the price of not more than 5 million USD per passenger seat (100 - 150 kg). According to the marketing studies carried out by our specialists, television company hosts, advertising agencies, space agencies of different countries and individuals having sufficient funds and health for this kind of travel could be the passengers. The low cost which will make space programmes popular is achieved with the use of a particular technical method
Автор: OLEG на 2:06 AM 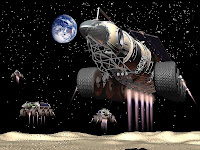 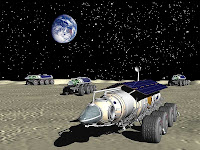 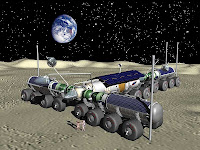 Here has still found the article with the my project.


There were not many advanced long-term space projects exhibited at the International Aviation and Space Salon (MAKS-2001). Nonetheless, the project exhibited by a Russian company under the title of "Cruise-Service" was extraordinary due to the distinctive and bold solutions underlying the project. So we have decided to make it a starting point for a cycle of articles about advanced domestic and foreign space projects.
O. Aleksandrov specially for Astronautics News

Universal Space System (USS), the project developed by Cruise Service, is aimed at establishing space tour business in Russia with support from foreign investors. Provisions are made in the project for building universal cruise modules which will be able to dock with themselves thus allowing to be launched with the use of various launchers, for example, "Space Shuttle", "Zenit", "Soyuz". Real "space hotels" with any accommodation capacity can be built in the orbit on the basis of such modules.

The company decided to start implementing the Universal Space System project with participation in the X-Prize content (Astronautics News No. 8, 2001, p. 15) where it intends to demonstrate the capabilities of its system. With regular suborbital flights to the altitude of over 150 km under the Sea Launch Cruiser the cost of one passenger seat is expected to go down to 10,000 USD with the passenger capacity of one module reaching 150 to 200 persons!

Passenger safety is a serious consideration at all flight stages. Due to three spare parachute sets, a powerful, a powerful SAS and a triple system backup the safety of the Universal Space System can exceed that of passenger planes.

Unit A (the first stage of Energiya launch vehicle) designed for multiple use is planned to be used as the launch vehicle in suborbital cruises. The Universal Space System will be launched from the Sea Launch platform, and the company intends to combine high profile sea cruises with exotic space travel.

Just imagine a luxurious cruiser slowly mooring at the Sea Launch platform where a not less luxurious suborbital spacecraft is waiting for the lucky ones whose health and wallet allow to pay for the additional service.

But the company will go beyond suborbital cruises. The modules are originally designed as universal orbital units that can be placed into the cargo module of a shuttle. They will be equipped with a docking system with additional fuel modules and engines which will allow to fly round the Moon as early as in 2008 (a module with the passenger capacity of 35 persons for the price of 20 mln USD for each)!

And if there is nothing to hamper the implementation of suborbital flights under the Sea Launch Cruiser project, space in the shuttle cargo module will have be leased so that Universal Space System modules can be taken to the orbit. It should also be taken into account that, as a rule, the cargo capacity of shuttles is under-utilised by 10% to 60%. Accommodating Universal Space System modules as an additional cargo in flights to the International Space Station can reduce ISS logistics costs by 3 to 5 times.

According to the estimates made by specialists, the reconstruction of Energiya-Buran, the similar Russian system, will be possible, if about 10 bln USD of investment is available. Should it be possible to reconstruct the Energiya-Buran system for 2 to 3 bln USD, the project will be quite realistic without the need for using a US shuttle.

Currently Cruise Service has a specific plan for raising investment for the project. Nonetheless, the company is inviting all interested organisations and individuals to cooperate with the project.
Автор: OLEG на 4:15 PM

Looking for life in space? There is nothing easier! The super telescope project is at your service. 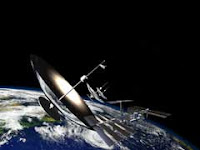 I'm proposing a project of a parabolic reflecting telescope with an unlimited cycle of focal distance control and automatic light pressure compensation intended for radioastronomic observations, ultra long-range space communications, location, optical and radio lighting of the segments of Earth and space objects.

Provisions are made in the project for delivering to the orbit a film reflector which is 1000 metres in diameter! (more than three times as big as the telescope at Aresibo). Its total weight is 8.5 tons. The reflecting surface area is 800,000 m2, the reflector material is polymer film with metal coating with original temperature control and automatic light pressure compensation.

A method of very simple highly reliable spreading of panels of very thin low strength materials in open space has been developed (on Earth); this method has no analogs and can be used for frameless structures which are over 5000 x 5000 metres in size!

Another highly reliable and simple system is the one for forming and adjusting the reflector surface; it allows to build reflectors of the paraboloid, spheroid, hyperboloid, ellipsoid of revolution types with the precision of up to 0.5 mm.
Автор: OLEG на 3:48 PM

Today has found at itself in garage in stuff one more my project.
Certainly it is not obligatory to sit down the cosmonaut for a wheel of a movie camera but on any it is cool :)

The project is based on the know-how for making space scenery with high precision reproduction of real or conceived natural scale objects.

For example, scenery in the form of the International Space Station or MIR station in the natural scale of 1:1 with the highest degree of precision of its outlines, together with a spatial stabilisation system, weighs not more than 850 kg (scenery in the form of 6 shuttles in the scale of 1:1 will have similar weight); the difference between scenery and a real object can be told only by a specialist at the distance of two metres.

Scenery with dimensions similar to those of the ISS can be packed into the volume of 2.5 to 3.0 m3 and be unfolded to the original dimensions automatically within not more than 120 minutes.

However, the most important component in the project is the local transport system which allows to carry out complex controlled within the radius of 100 metres without any consumption of propellant. Model tests of such a system have been carried out with the results exceeding all expectations, and control software versions have been developed.
Автор: OLEG на 2:10 PM