Mars Mobile Base and it 4D version. 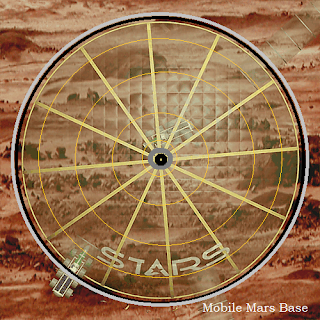 I so have thought, have turned the thought in a head in the form of 4D models (3D + time).
Also has solved that we will model Martian conditions......With crew Directly on Mars!!!
Modelling of conditions directly on Mars. we will begin directly to 50 y. Apollo-11. Not later.
And still I have solved that all Martian base will be mobile. It will move across Mars on wheels which will fasten to a power rim with inhabited compartments. If the base gets to a trap it too will fly through mountain without any problems.
Ок so I also will make..
Автор: OLEG на 6:45 PM